I'm phasing out my old email and cell number.  The correct email is cdberry@gmail.com; the correct phone number starts with 310-2.  If you have a different email address for me, please replace it with the correct one.  If you need my new phone number, contact me directly to get it.  Both of the old versions will stop working within three months. 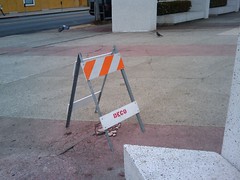 Art under construction
Originally uploaded by craigdberry
I figure Art Nouveau will be constructed a little further down the block. 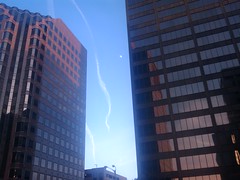 Mixcoatl
Originally uploaded by craigdberry
Mixcoatl was an Aztec deity, the father (according to some versions of the story) of Quetzalcoatl. The word literally means "cloud snake". Here's Mixcoatl dancing with Coyolxahqui, the goddess of the Moon, over Westwood.

belladonna93  got stuck in a massive anti-prop-8-ruling protest on her way home.  It took her more than an hour and a great deal of frustration and anxiety to work her way through blocked-off-streets, crowds of protesters, and jammed traffic.  The same thing happened to me twice in the week following the passage of Proposition 8.

I'm all for civil disobedience and nonviolent protest.  But may I point out that the communities where these protests have been happening -- Westwood, West Hollywood, and Hollywood -- are precisely the communities with the strongest support for (and largest population of) GLBT people in Southern California?  I would be extremely surprised if more than 5% of those inconvenienced by these protests favored Proposition 8.

So what we had here was a bunch of protesters disrupting the lives of their own community members, and of their most ardent supporters, to protest a decision made by a small group of judges who live in and around Sacramento, 400 miles to the north.  The net outcome for me was that I had a brief urge to support Proposition 8 just to avoid rewarding stupid and rude behavior.  Is that really the PR result the community wants?

Some days I really don't get people at all.

I mentioned in my post earlier today that my EGC crown disappeared at some point during preparations for the wedding I performed last Saturday morning.  To my great relief, the staff at the Grove found it and is holding it for me.  I can't help wondering if it's the strangest item ever to land in their lost and found box. :)

Wow, it's been quite a while since my last post.  LJ seems to be a cyclical thing with me; I'll post and read very actively for a month or two, then take a few weeks off.  I should gather stats on my posting and see if it matches one of the biorhythm curves or something. :)

For the last two weeks, I actually have a good excuse for not having posted: I haven't had five spare minutes the whole time.  The weekend before last,

belladonna93  and I flew to Las Vegas for a mini-vacation to celebrate her birthday.  We had a wonderful time; the highlights were a lovely dinner at Postrio in the Venetian, and a visit to the Bodies exhibition in the Luxor.  I recommend the latter very highly to all of my friends who are at least slightly morbid and not excessively squeamish...which is pretty much the same as saying "all my friends" without further qualification.

The only disappointment of the trip was finding that, as

z111  had warned me, the Luxor has embarked on a campaign of systematic de-Egyptian-ification.  Many of the things I remember from my last visit several years ago -- gift shops stocked with interesting pseudo-artifacts, an exhibit of actual Egyptian relics, cheesy but fun Egyptian naming and decor -- are gone or much reduced.  Apparently management has concluded that middle America doesn't want to stay at a middle-eastern themed hotel.  That makes me so sad, frustrated, and disgusted I had to force myself to stop thinking about it in order to enjoy my stay there.

belladonna93  flew home, and I changed gears from vacation to episcopal mode.  First, on Sunday evening I attended a Gnostic Mass at AHBH Camp, where I supervise several members of the clergy.  Celebrating Mass in a cramped living-room temple made me nostalgic for the olden times; watching the officiants having to move the font back and forth to make room for ritual activities quickly tempered that nostalgia.  The Mass was rightly performed with joy and beauty; my thanks and congratulations to the Mass team and the whole AHBH crew for what they're accomplishing in Las Vegas!

On Monday Sister C. and I discussed preparations for the wedding, and visited the site where the ceremony was to occur.  I'd kept the whole day free, but it turned out only a couple of hours were needed for preparations and nothing else emerged to fill my remaining time during the day, so I spent a few relaxing hours reading.  Ah, luxury.  Then it was out to a Nepalese dinner with a few of the AHBH members on the way to the airport, and back to Los Angeles.

There followed a crammed week of long days at work, fully booked evenings, and (around the edges of those) trying to prepare for a double-whammy Memorial Day weekend.  On Friday evening, I flew back up to Vegas to perform C and J's wedding.  The ceremony was held in a beautiful outdoor location on Saturday morning, and despite a few minor glitches -- most notably the truly mysterious disappearance of my EGC crown, which seems to have evaporated into the ether on the way to the wedding -- everything went beautifully.

sabazius_x  and Helena's wedding ceremony, done stand-alone rather than as part of a Mass.  The funniest moment was when the very young and very terrified ringbearer came up the aisle, got within about ten feet of his intended position, then panicked and ran past us and out into the very large expanse of grass behind us.  He stopped about 50 feet away.  It took us a minute or two to coax him back into place.

Following a really pleasant reception and a quick tapas stop with

z111 , it was back to the airport for an afternoon flight to LA, where I was due to join the Kaaba Colloquium already in progress.  I took a taxi from LAX to the conference hotel, arriving exactly in time to join the team for the Saturday debrief dinner.  We spent a couple of hours at that, then drove over to Star Sapphire Lodge for the reception, which I barely remember because I was hitting the wall hard by that point.  To say that I slept well that evening is a considerable understatement.

Before I knew it, my alarm was beeping Sunday morning, and it was time to get up and prepare for my four Kaaba presentations -- three of them before lunch.  Whee.  Fortunately, coffee reached my synapses in the nick of time, and all of my presentations went well.  As usual, "The Creepy Guy" was the big hit.  It's not necessarily the title I'd prefer to have associated with my name, but that's show biz.

Then it was another debrief dinner, then back over to SSL for a lovely Mass, followed by another definitve hitting of the wall, and a trip back to the hotel and my bed that I made largely in my sleep, so far as I can tell.  Monday was much more relaxed -- no public speaking!  No ritual lines to do from memory! -- but still intense, as the Kaaba team spent the whole day discussing the outcome of our "Kaaba 3.0" dual-tracking approach and made plans for future Kaaba topics and locations.

You know you're leading a busy life when you go to bed on the Monday of Memorial Day weekend thinking "Oh thank God, I can go to work tomorrow and relax a little."

I came down with the flu last Wednesday.  Given all the news coverage, it's hard not to think "OMG swine flu!", but I'm reasonably sure it's just regular old flu.  I'm calling it "piglet flu" -- like swine flu, only smaller.

My recovery process was not helped by the fact that I had about 14 hours of continuous work to do on Saturday, as we installed the new Master at Star Sapphire Lodge.  I can sometimes make a deal with my body where I fake being well for a day or so, with the accumulated sickness debt coming due when I'm done.  I pulled off that trick on Saturday, thank goodness, but oh boy, was there a high balance due come Sunday.

However, the event was well worth it.  The Lodge was jammed, with just about all the locals as well as a healthy contingent from Orange County in attendance.  We used a further-modified version of Fr. Dionysus's adaptation of a Masonic Lodge Master installation ritual, which is like a candy store for us ritual pomp-and-circumstance fans.  There were tears, laughter, and love in overwhelming abundance.  I think we got this thing started just right.

Now I'm back at work, sniffling, achey, tired...and smiling.  That works for me.

A post on a web-design-related mailing list to which I subscribe pointed out this site for an ecumenical Christian group.  It has the distinction of featuring the most spastic, overdone, unintentionally amusing Flash intro I've ever seen -- and that's a pretty high bar.  Enjoy.  I'm not responsible for any unwelcome neurological effects.

Omnia in Duos: Duo in Unum.